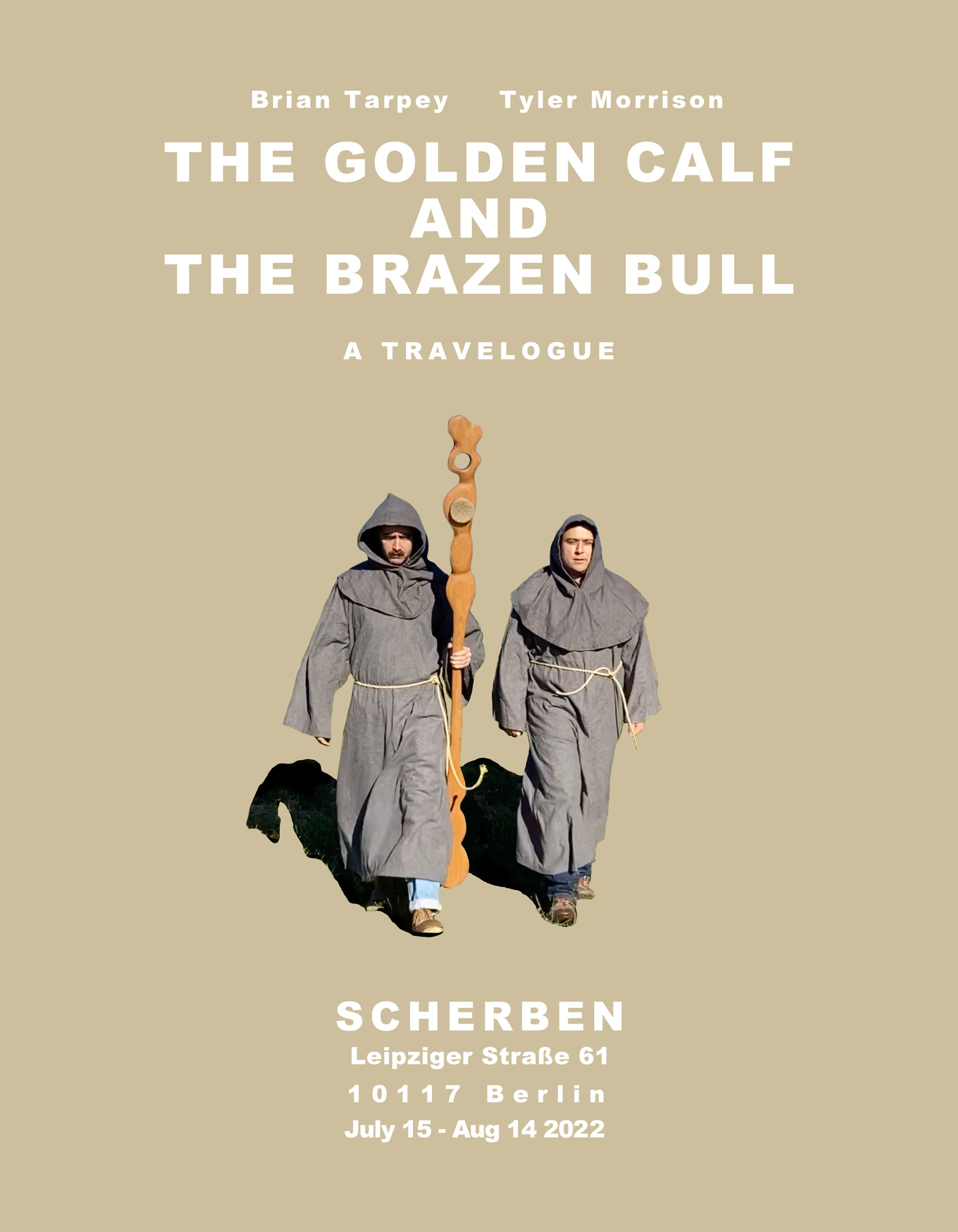 The golden calf and the brazen bull

A collaborative project by two Los Angeles-based artists, this exhibition shows the artifacts of a set of characters traveling through a multitude of spaces. Some of these spaces are real, some fictitious, some contemporary, and some from long ago; they have all enabled these multidimensional explorers to draw on, distort, cite, and warp the different ideas and themes that have come to them.

The alchemical product of manipulating the experienced logic is a travelogue; an absurd yet serious documentation.

Brian Tarpey and Tyler Morrison write that their work pertains “to the pitfalls of collaboration as an enterprise.”  They are true to their words, creating art works that respond to a remit of collaboration as, “a series of specific issues … taken and placed into a cerebral bingo caller”.   This is a bingo game you want to play.  There are so many artefacts of their explorations — video, sculpture, and paintings, for example — and so many ways to enter their show, that I felt as if I were following breadcrumbs laid out for an audience, but with breaks between episodes — taking meaning as one can or chooses to, relaxing into a folly of collaboration with no fixed abode, point of view, or narrative closure.  The work is generous, brave, and legion.

Among the clues dotting the path through the Tarpey/Morrison universe are friars in floppy outfits with no attention paid to fit, in which they trudge through tunnels, cow muck, and fake Stonehenge columns.  There is nothing heroic in their actions, other than, perhaps, performing as actors in fetid underground tunnels.  This isn’t the myth of the hero; this is the myth of a reluctant Bartleby the Scrivener who prefers not to but does.   The players scrawl cows’ images in candlelit tunnels, have the obligatory face-off with a Minotaur, and perform their assigned rounds in a dairy farm, acting as a human indexical project that ticks the boxes of ancient myths with the gusto of two men waiting for their prescriptions of anti-depressants to be filled.   They chart their path in collaborative exploration caring not for the machismo hullabaloo of phallic pride, whether of an ancient Cretan or a suited-and-booted business executive.

Their paintings tell a different story.  Whether they are scrawled (the cows) or meticulously constructed, another form of negotiation is at work, one that weds Morrison’s commitment to paint qua paint with Tarpey’s background in sculpture and performative pieces.  In “Berlin, Vermont” and “In Search of Lost Corn”, paint as background and treated aluminium as foreground insist that the eye can’t rest on one plane, though there are densities that act as proposed punctums:  the black-and-white tondo in the middle of the barn, say, or the peach/pastel necco-wafer colour of a square in “In Search of Lost Corn”.  The works hover between figuration and abstraction, driven by a palette that either deploys complementary colours (“Barn”) in one instance, or evokes in “Lost Corn” a hallucinatory corn maze mapped out in blues, dark browns, and hay-bale yellows.  The colours radiate in various directions, but there is a compositional true north that makes it impossible to get lost.

As in the corpus of each artist’s work, Morrison and Tarpey deploy multiple iterations of their given themes.  Some of the iterative gestures in the current exhibition take the form of sculpture, such as a three-dimensional bull’s head.  Another embodies the market and a banal heroic, which is to say, coins of the artists’ profiles as a sort of NFT, referencing the entirely un-banal history of accounting as it was proposed in the early Renaissance by Luca Pacioli.  This matters because of the ethos of that time, which encompassed discoveries in mathematics and compositional space (Pierro della Francesca and Leonardo Da Vinci), for which each was a requirement for the other.   That mapping between areas of research is as much the subject of the Tarpey/Morrison exhibit as anything else.

In the video, “The Golden Calf and the Brazen Bull” two people traverse the Los Angeles River and enter tunnels only to exit through Vermont’s stone chambers, resonant with the unsolved mysteries of their origins.  Without the magic of CGI, we watch the two actors transit through space and time like silent movie characters, then walk later onto a vast desert, quoting along the way sacrifice, torture, heroic achievement, mysteries, quests, faith, ecology, and the banalities of pop culture.   Although this is video, and the objects that accompany it form a travelogue, as Tarpey and Morrison define it, they are also a love letter and homage to the space between people and things.  To quote E.M. Forster, “Only connect!”  It does — and we do.