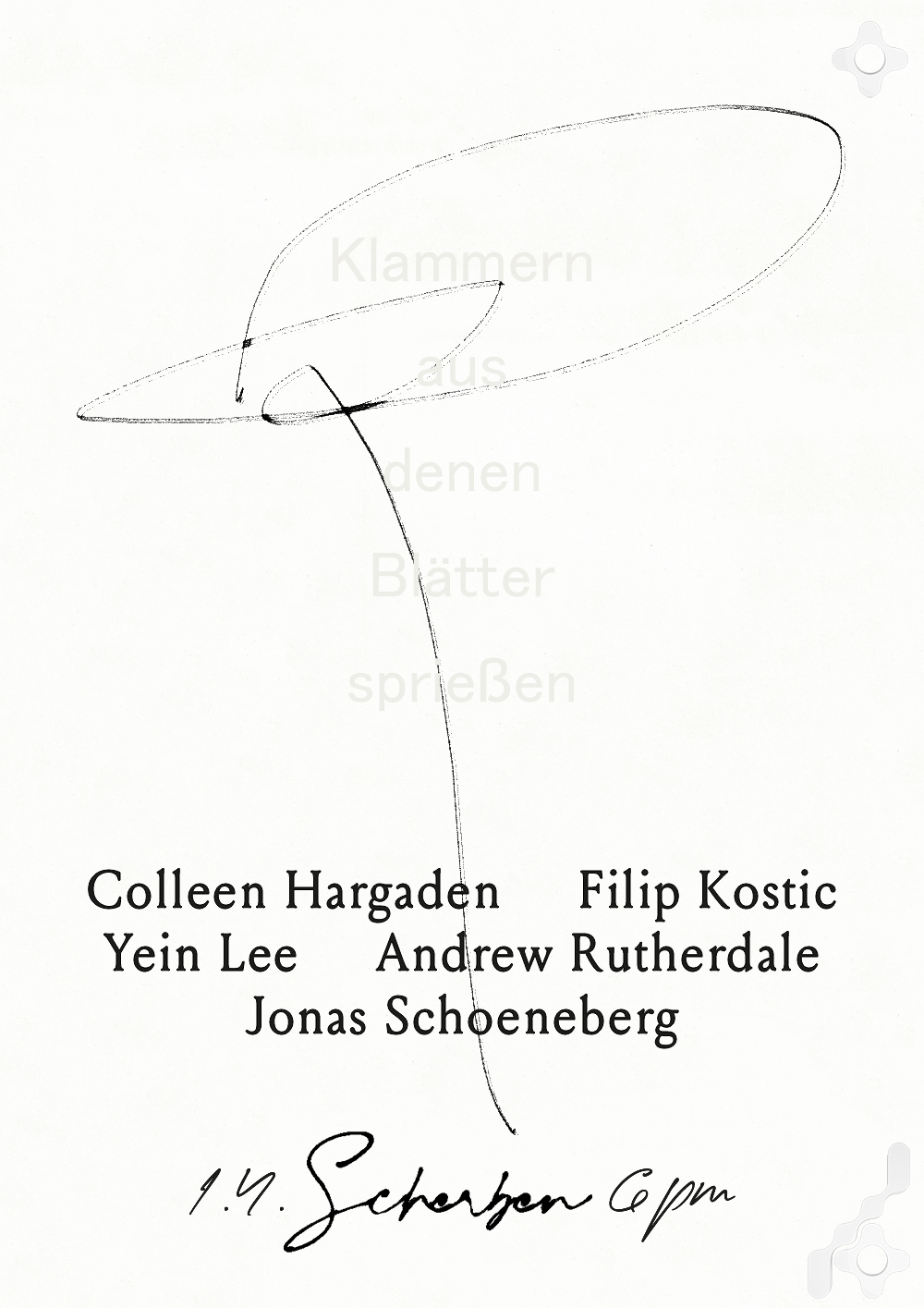 Brackets are symbols that wrap around words, phrases or sentences in a piece of writing. They mark what should be considered a separate organ to the main body of text. Most machinic screen readers will gloss over them, meaning a. they will just leave the brackets including their contents out, or b. they will read the contents without hinting to the existence of the brackets, all that (in text) is hugged in by the brackets then swims (in speech) in the same soup as the remaining text.

It’s not just machines though, because a human translator from text to speech encounters the same issue. [To open and close brackets, or not to open or close brackets? (In speech, that is.)]

No beauty for the profane. In mathematical operations, brackets determine the order of those operations, meaning brackets are algorithmic devices. When brackets are nested, the rule is that you must work from the inside out. Some birds work differently, often dropping stuff into a chosen tree, relying on spider silk and saliva to make it stick. As we know, trees grow leaves, but so do brackets. At least that is one possible scenario in the not-so-distant future.

Hence, brackets do (sprout, grow, shape) matter. Imagine for a second the Bed (PC), or the (Bed) PC, or (automatic) drawing vs. automatic (drawing), or synthetic (organism) in relation to (synthetic) organism. Though you can’t really continue this exercise indefinitely, because madness will overtake meaning, which is a good sensation in general, but only in moderation.

Consider these brackets, the green foliage of a plant yet to be discovered:

(Oh the joy of working on a warm body)

{a painting reaches for the handle of a window, opens itself into its surrounding, oh! it spilled a living organism all over the ground, hope no one minds}

<Like brackets, a capsule encloses something. It preserves something in a stable environment by cutting it off from another. It remains to be seen whom or what this tendency serves. Escape fear, escape hope!>

Once you’ve made a gateway of brackets, slipping into the embrace between them, you unlock the control console and peer into its memory slot. There. Expect a beautiful but unreal setting. 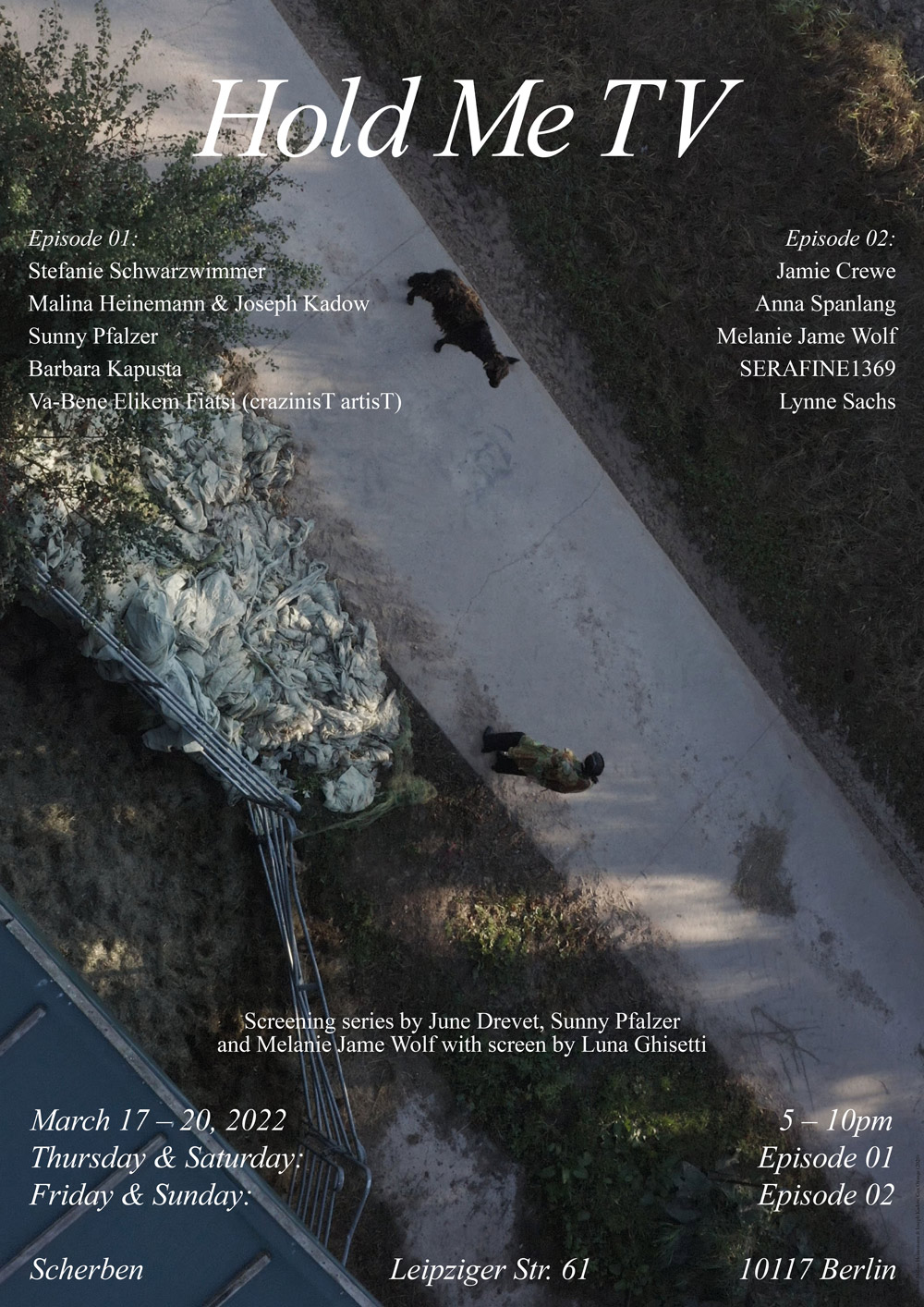 Hold Me TV is a 4 day screening program featuring films and videos by 10 artists who work in a variety of ways with the embodied camera. In these works, the camera is an integral (body) part of the worlds the artists build – humorous, sensorial, uncanny, fleshy, kinetic, intimate, public, high stakes.

This screening series is a collective curatorial effort by writer and curator June Drevet, visual artist Sunny Pfalzer, and choreographer and artist Melanie Jame Wolf. They invite visitors to watch films together while thinking about the agency and possibility of bodies in the different formal systems of choreography, cinema, and visual art. And to question what alternate regimes of looking can be produced when those distinct formal systems intersect. 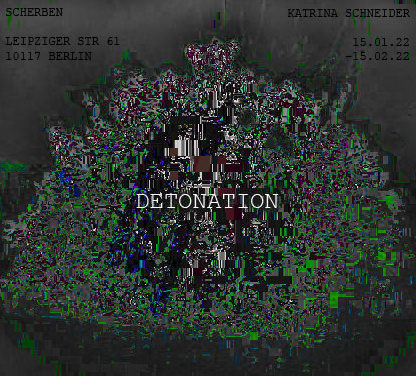 a game of symbio-parasitical metamorphosis.

the body as hole.

look behind. the syringe in your medulla.

invert yourself. turn the cannons.Exit !1radicalism.

‘ The vacuum remains: you stand in midcourse, shocked by the discovery, and those of you

cry out to return there, to the sources, but you cannot go back, your retreat is cut off,

the bridges burned, so you must go forward ‘ Golem XIV 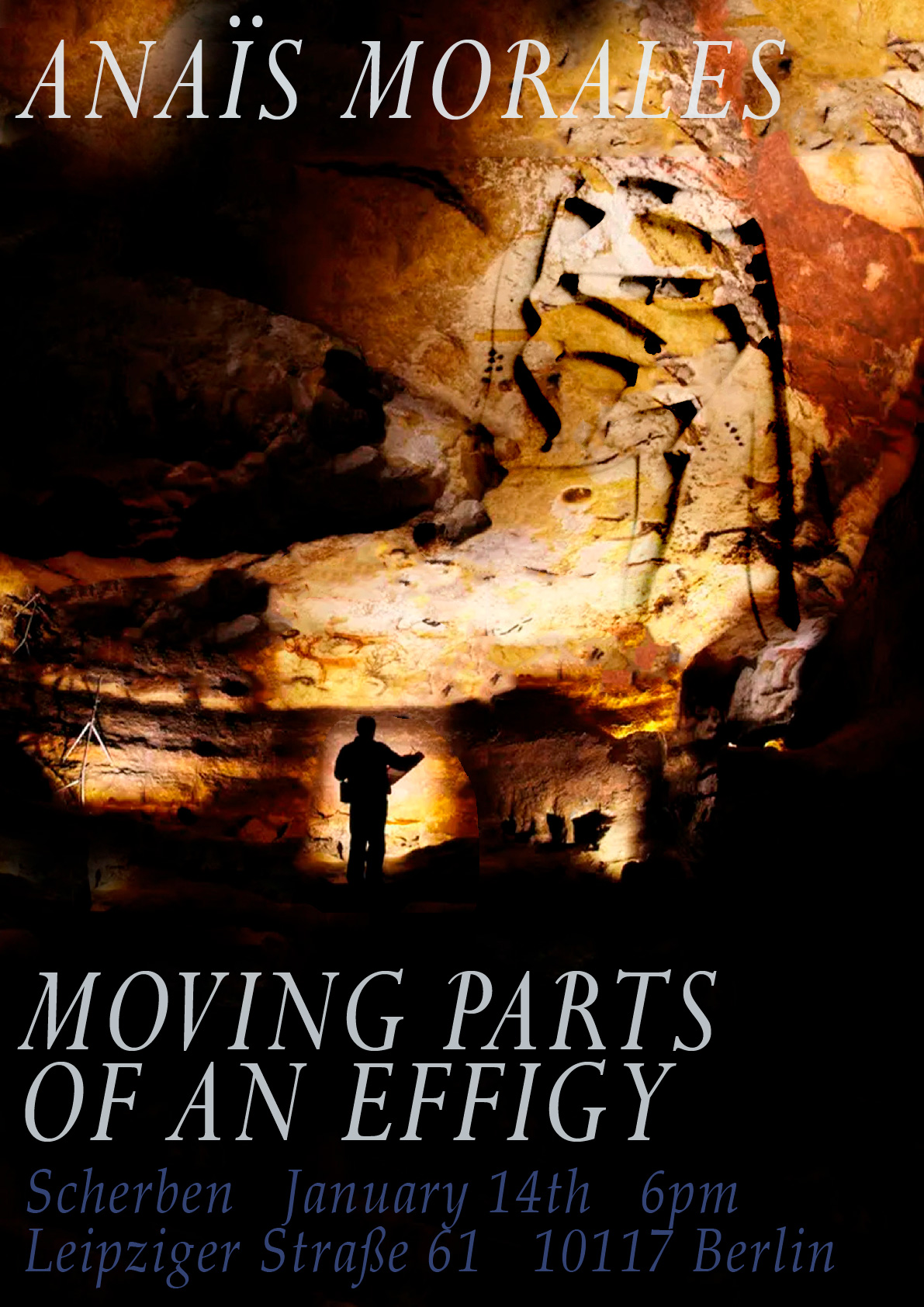 “The problem of mitosis is located in the tendency of the identical.

Divided is the split.

An explosion that occurs in humanity dissected down to the minute-to-minute or second-by-second, is in some sense a distillation of different urges and passions.

At Scherben, Eulitz has collected design objects of discrete historical origins and interwoven their contexts into a shared narrative. In this process, what is imperceptible of these object-histories is illuminated, having otherwise been unseen, misunderstood, or buried. Contained within their design and consumption are political ramifications of production, hidden in plain sight. Some of them (the VEB Halle pendant lights) are perhaps more glamorous than others (the United Buddy Bears and Ikea’s Billy bookshelves). Having transposed the exhibition’s milieu, social tensions come to the fore, reminding us that if we want to make sense of our world, overcoming our longing for Gemütlichkeit, or hominess, is perhaps a necessary step. 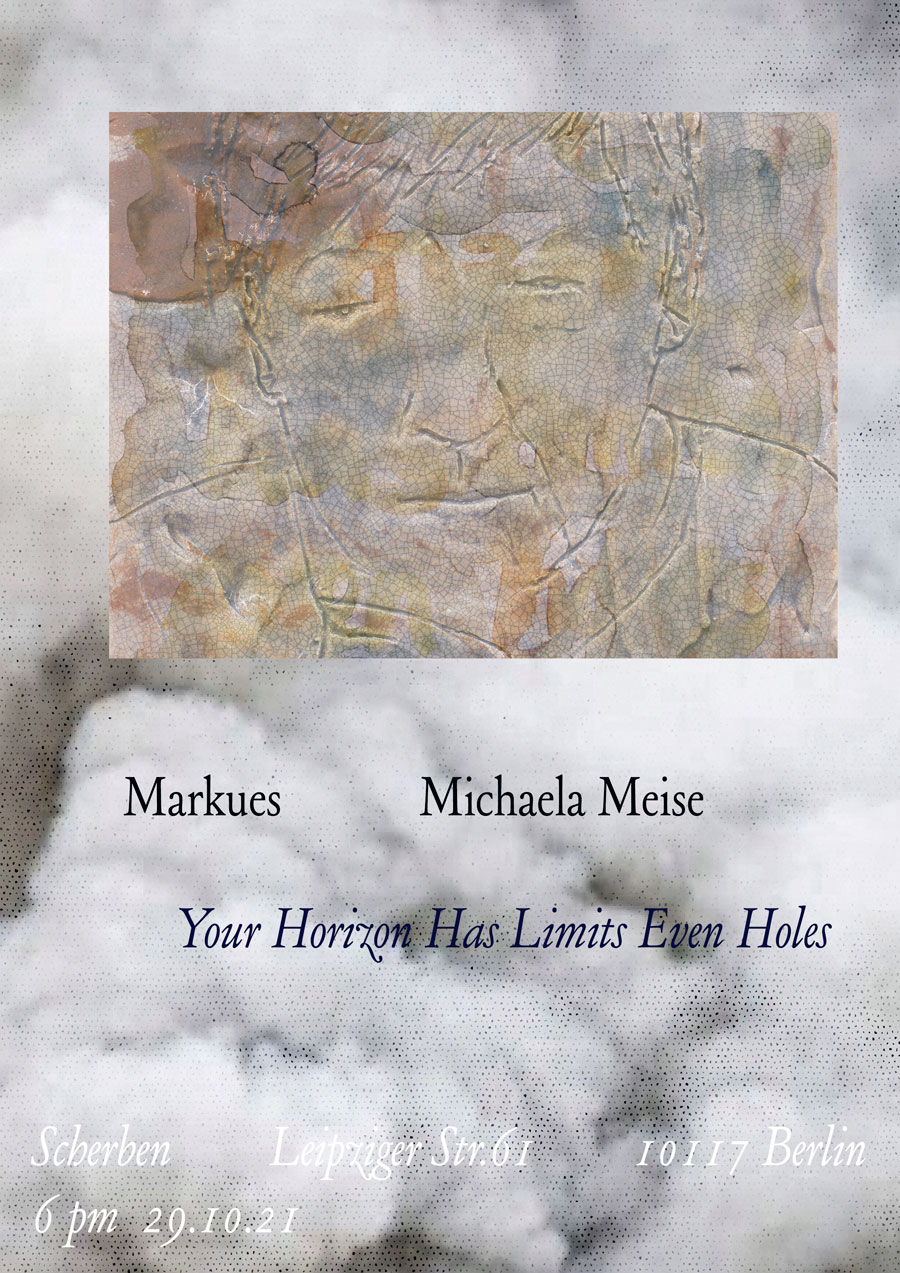 Markues & Michaela Meise – Your horizon has limits even holes.

Your horizon has limits even holes.

You can close your eyes.
Trans Columns.
The past will catch you up if you run faster.
Portrait of Luce Irigaray.
My shop is the face I front.
We walk the same line.

A layer of fog occasionally spreads over the floor of the exhibition space at Scherben. It floats gently through the rods of Michaela Meises Trans Columns, rises slowly into the heights of the room, and interposes a soft blur before the watercolors in Markues’s series For the Men & the Others. An atmosphere somewhere between fantasy film, night club, and calculated effect results, which unites the works while also making the distance between them and the viewer tangible. A similar ambiguity characterizes the Trans Columns themselves. Developed in 2009 in the aftermath of the global financial crisis, the sculptures transform the column, typically a symbol of stability in patriarchal society, into something mobile. Without a roof to support, they become permeable.

In their attempts to undermine the certainty and stability of meaning in patriarchal society in favor of the fluid and mercurial, both Markues and Michaela Meise have looked to the writing of feminist psychoanalyst and philosopher Luce Irigaray. The title of the exhibition, as well as one of Markues’s watercolors, Your Horizon Has Limits Even Holes, is a quotation from Irigaray’s work. Through her attention to bodily experience and engendered perception, she acknowledges the particularity of each individual without forgetting our shared connections.

Irigaray’s approach to language is mirrored in Markues’s watercolor series For the Men & the Others, in production since 2014. In each watercolor, the text is usually a quotation whose liquid script cannot be spoken, but is nevertheless open to examination. Painted in a gestural but antisubjective and deskilled fashion, the watercolors challenge the construction of subjectivity through both form and content. Because language comes from the other, it is not the subject who speaks; the subject is spoken. Alongside Markues’s watercolors hangs a ceramic relief portrait of Luce Irigaray made by Michaela Meise.

It depicts the philosopher reading a book — as she did while modeling for the portrait. On the 21st of November, there will be several readings in the exhibition space. During the readings, three sculptures by Michaela Meise will be installed for use as seating: Cheshire Cat and two Cheshire Kittens (all 2013). The exhibition is also accompanied by a commissioned text by Monilola Olayemi Ilupeju titled “The Lawn,” a poetic collage rethinking the concept of intuition. 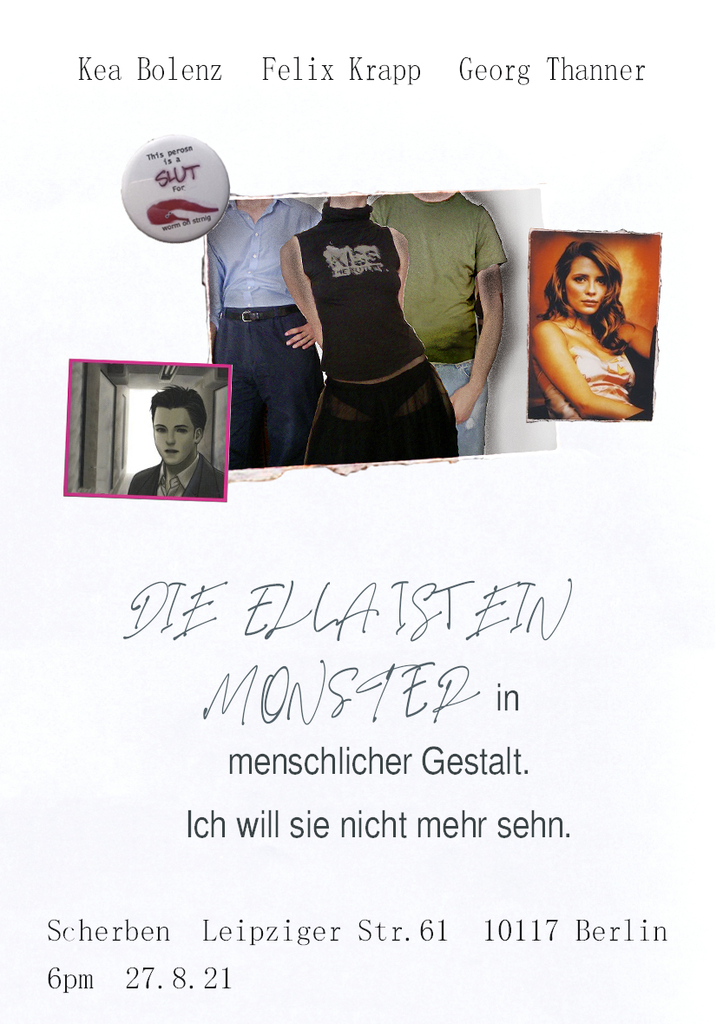